Based on the moving direction of mobile phase the paper chromatography is classified into following types:

i) Ascending paper chromatography: In this process, solvent is present in a dish in the base. The liquid moves toward upside of the paper by capillary movement against to gravitational pull.

Ascending Paper Chromatography Procedure: a filter paper is taken and a pencil line is drawn along the width of the paper above 5 cm from one end. This is called base line.

Then the solution mixture is employed on the center of the base line very densely. The filter paper is suspended in a glass tank containing the developing solvent so that the base line dips in the solvent to a depth of 2 cm. Due to capillary action the solvent moves up. The movement is fast in the beginning and it progressively slows down after few hours and lastly it stops. This is the solvent front.

The movement stops totally due to a balance is formed between the capillary strength and downward gravitational pull.

The solvent front is marked with a pencil. Paper is removed from the tank without delay and dried. The paper now having different spots is called chromatogram. If the paper is placed in the tank for more time, the spots may diffuse on the developed Chromatogram. 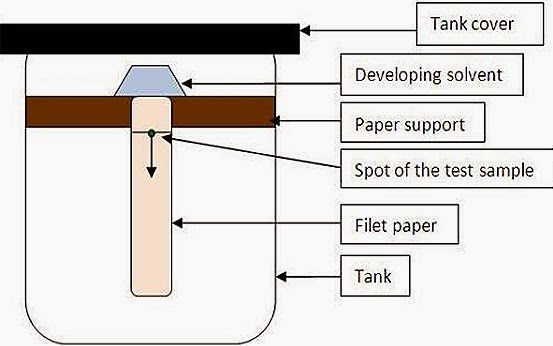 (II) DESCENDING PAPER CHROMATOGRAPHY: in this technique the solvent moves towards downside:

In this technique, the paper is dipped into the solvent (present in trough) near the top of the tank and a heavy glass rod maintains the paper in its alignment. The paper weighs on a other glass rod positioned horizontally parallel to the trough. The mixture of separation (dissolved in the solvent) is put on the paper at an outside spot (outside the trough) in a way that the solvent creates an uniformly moving front" prior to when it reaches the spot. In order to get even dripping and uniform movement, the base of the paper is cutting into a fitting edge.

DESCENDING CHROMATOGRAPHY LIMITATIONS: Calculation of Rf value is not possible in this process. So standards are run simultaneously and the distances moved by various constituents of the mixture are in comparison.

(III) RADIAL CHROMATOGRAPHY OR HORIZONTAL CHROMATOGRAPHY: This technique is suitable for fast isolations. In this technique, the spot of the mixture is employed at the centre of a round paper held in the flat surface. The solvent in fed at the centre. As the solvent spreads by the usual capillary force the components of the mixture are separated by radial development in the form of concentric arcs of circles.