The nervous system of Leech is basically annelidan but it shows advancement over the other annelids. It shows central, peripheral and autonomic nervous systems.

It is enclosed in the venteral haemocoebmic canal. It shows.

i) Cerebral ganglia and nerve ring

The ganglia are made by nerve cells.

i) Cerebral ganglia and nerve ring: On the pharynx in the fifth segment a pair of cerebral of supra' pharyngeal ganglia are present. They are fused. It is called brain. 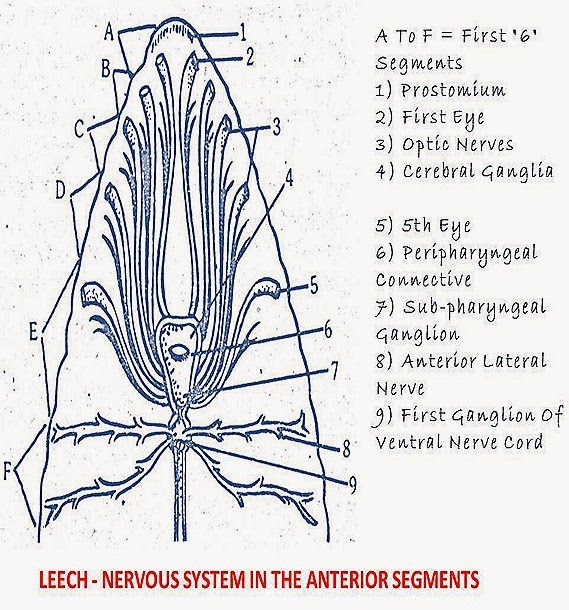 Below the pharynx in the fifth segment sub-pharyngeal ganglionic mass is present. It is formed by the union of the 4 pairs of ganglia.

The nerve cord shows 21 ganglia, one ganglion in the first annulus of each segment from 6th to 26th segments of the body: Each ganglion is formed by the union of 2 ganglia. They give nerves or peripheral nerves. The nerve cord is made by nerve cells and nerve fibres.

i) One pair of nerves will arise from the front side of brain and go to first pair of eyes and prostomium.

ii) Four pairs of nerves arise from the sub-pharyngeal ganglionic mass. They go to 2, 3, 4, 5th pairs of eyes.

iii) Two pairs of nerves arise from each ganglion, and go to the body parts.

iv) Seven pairs of nerves will arise from terminal ganglionic mass and they go to posterior sucker.

3. Autonomic nervous system: Below the epidermis, in the muscles and on the wall of the alimentary canal nerve plexi are present. They join with peri pharyngeal connectives of the central nervous system. They also show connection with multipolar ganglionic cells present in the gut wall. Sensory Receptors of Leech :

Each eye is a cup like structure; it contains many large, light sensitive cells in vertical rows. Each cell contains a lens, and the cytoplasm is a thin layer.

Nucleus is pushed to one side. Each eye is covered on the free surface by cornea. Cornea is formed by transparent epidermal cells. Each eye is innervated by an optic nerve at the base.

It is not clearly known whether image is formed in the eye or not. Variation in the sizes of the Eyes :

i) The first and second pairs of eyes are largest.

ii)The fifth pair of eyes will be smallest.

Direction of the eyes:

i) The first pair of eyes will face forwards.

ii)The second pair of eyes will face forwards and outwards.

iii) The third and fourth pair of eyes will face backwards and outwards.

iv) The fifth pair of eyes will face backwards; because of this directional arrangement of eyes the animal can receive light rays from all sides.

b) Free nerve endings: All over the body these receptors are present. They are chemoreceptors. These are the nerve ends. These nerves will arise from the nerve cells present below the epidermis. They notice the chemical changes of the surroundings.

Each segmental receptor is papilla like structure with a group of tall, slender cells. In between the cells intercellular spaces are present. From the base of each cell a nerve fibril will arise. All the nerve fibrils will unite at the base of the receptor and becomes a nerve.

These receptors are tactile receptors. The dorsal segmental receptors work as tango and photoreceptors.