Lysosome : These are first ob­served in liver cells. They are 1.5 to 2 milii micron in size These are single mem­brane bounded structures. They were first called pericanalicular-dense bodies. "Chris­tian De Duve" called them lysosomes in 1955. They were named as lysosomes because they contain hydrolytic enzymes.

Occurence: They are present in all animal cells ,except mammalian R.B.C. They are more in liver cells spleen cells, kidney cells etc.. In bacteria they are absent.

Shape & size : They are round or spherical bodies. They are .4 to .8 milli microns in size.

Structure : Each lysosome is covered by a unit membrane. It encloses a dense matrix. It shows 2 regions, outer dense part and central less dense part. 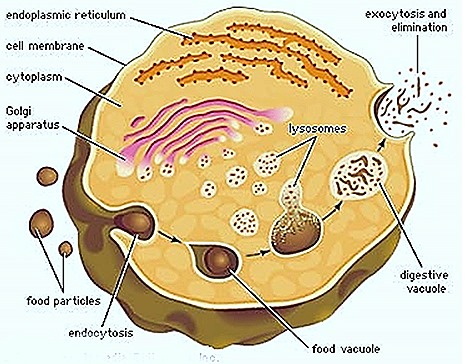 Chemical composition: Every lysosome will show hydrolytic enzyme. They are important in digestion of food such as 40 enzymes arc recognized in lysosome.

Polymorphism in lysosomes or kinds of lysosomes :

In the same cell at different times or in different cells 4 kinds of lysosome are reported.

a) Primary lysosome or storage granule :

2. It is formed from golgi.

3. it forms from G.E.R.L, which means 'Golgi associated with Endoplas­mic Reticulum will give Lysosome". This was stated by Dyson 1978.

4. This is called original lysosome.

b) Phagosome or pinosome or digestive vacuole :

1. A original lysosome units with a phagocytic or pinocync vesicle and forms a phagosome.

2. In this phagosome the food is digested.

When the organism is in a state of starvation the lysosome will start digesting the cell contents. Such lysosome is called autophagic vacuole.

After the process of digestion in phagosome or autophagic vacuole some materials are not digested. Such Iysosomes with undigested food is called residual body. This residual body will send the undigested matter through plasma membrane.

In nerve and muscle cells residual bodies are more in number. They are called, "Lipofucine granules". (By the estimation of these granules the age can be decided)

The polymorphic tendency of lysosome is not real, it is connected with the digestive activity of the lysosome.

Lysosome will perform the following functions.

1) Digestion of large extracellular particles on the out side.

Liposomal enzymes will be discharged out side of the cell and digest the material present out side the cell.

2) Digestion In cell or intracellular digestion :

Lysosomes will digest the food that enters into the cell.

The lysosome can digest the entire cell. It is called autolysis. Because of which De Duve called them suicidal bags of the cells. Autolysis is very important to the organisms.

Eg : The degeneration of tadpole tail in the fife history of frog is a result of autolysis.

When the cell is in starvation the lysosome of a cell, will start the digesting the cell contents. This is called autophagy.

During fertilization the acrosome of the sperm will produce lysosomal enzymes. They are useful to dissolve the tissue present around the ovum.

Lysosome shows acid DNA ase it will break the chromosome and cause the rearrangement.