The development of this organism- is completely studied. Its zygote will undergo spiral clevage.

1. Clevage is complete. The first two divisions are meridional and are at right angles to each other. Four cells are formed, out of the four cells, posterior cell is biggest and the remaining three are small.

2. In order to notice their fate these are named with alphabets.

5. Third cleavage is horizontal. 8 cells are formed. Out of 8 cells 4 are micromeres and 4 cells are macromeres. la, lb, lc and Id will form 1st quartet.

meres and 1, 2 and 3 quartets of micromeres are present. The cells of first three quarters will give epidermis. This embryonic stage is called Gastrula. 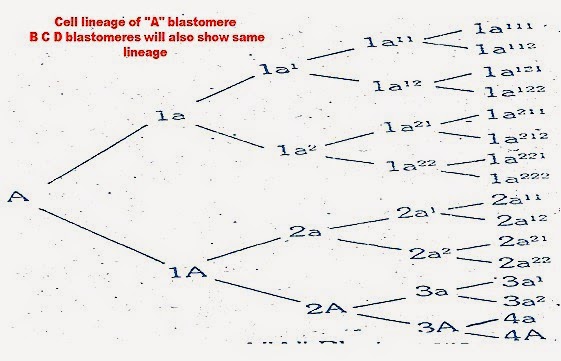 12. 4d21, 4d22 cells will give endoderm of the pharynx and also mesoderm. This mesoderm will give muscles, mesenchyme and reproductive systems.

Then the gastrula transforms into Müllers larva.

1. This larva is oval in shape. It freely swims in the sea water.

2. On its ventral side mouth is present

4. At the apex a bunch of cilia will be present. This bunch is called apical tuft.

5. Below the apical tuft of cilia two eye spots are present.

This larva will swim for 4 or 5 days in the water. Then it will transform into adult.