Non-medellan Inheritance-
One character may be influenced by many genes or many characters are influenced by a single gene. The Mendel’s theory states that each character is determined by two (2) genes. It is believed that a single phenotypic character depends upon the combined action of gene and environmental action. Many examples can be quoted which deviate from Mendel’s principles. This is called non-Mendelian inheritance. In some examples the genes may interact in different patterns. This concept was introduced by Bateson. Hence it is known as Batesons hypothesis.

In man deaf-mutism is an example of complementary genes. The normal hearing & speech In man develops as a result of interaction between gene A and B. Whenever a person is homozygous for either of the two recessive alleles i. e. either AAbb or aaBB, he is deaf-must. 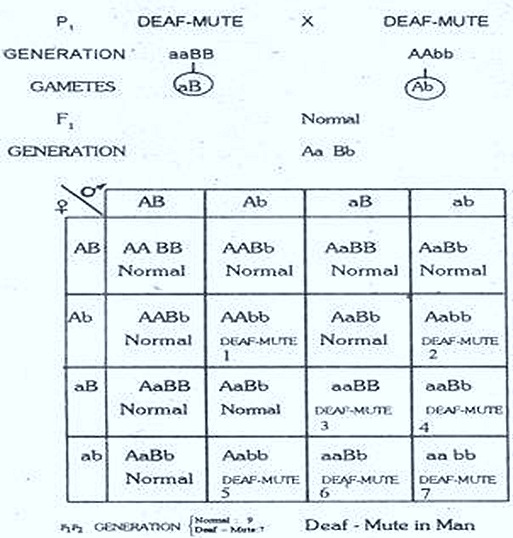 B. Supplementary genes (9:3:4 ratio):
These are two pairs of dominant genes, which interact in such way that one dominant gene will produce its effect whether the other Is present or nat. The second dominant gene when added changes the expression of the first one but on)y in the presence of first one.

Epistatis (act of stopping) is the interaction between non-allelic genes (present on separate loci) in which one gene suppresses the expression of other gene. The gene which suppresses the other is known as inhibiting or epistatic factor’ and the one which is prevented from exhibiting itself is known as Hypostatic gene’. Although it is similar to dominance and recessiveness but the two factors occupy two different loci.

Example of ,Dominant epistatis in Dogs : in dogs white coat colour appears to be dominant. It develops due to the action of epistatic gene I which prevents the formation of pigment, controlled by hypostatic gene B. The hypostatic gene B produces black coat while its hypostatic gene produces brown coat colour only when gene I is recessive. The progeny of dominant gene I does not allow them to function and results in white coat colour. When two white coat dogs are crossed, they produce white, black and brown in the ratio 12 :3 :1 respectively. The white dogs In this case posess gene for black or brown coat but does not produce the pigment because of the presence of gene I In dominant state.

When two pairs of genes determine the same or nearly same phenotype, so that either of the two genes is able to exhibit the character in question, these are said to be duplicate factors for seed pods.

Example: Fruit shape in Shepherd's purse: Shull found in Shepherded purse that there are two types of seed capsules (i) triangular, (ii) elongated or top-shaped. These when crossed, produce triangular and elongated fruits in the ratio at 15 1 respectively. The triangular character of seeds is controlled by two pairs of genes (T and D) which are present on two different loci In two different chromosomes. Both of them either collectively or singly produce triangular character of pods. Elongated pods appear only when these dominant genes are absent. Such genes are called duplicate genes or pseudo alleles.

Thus the mendelian F1 ratio 9: 3: 3: 1 is deviated hi different organisms and the genes interact and exhbit deviated ratios in F2