Aurelia is also called as jellyfish. This jelly fish is umbrella shaped with outer ex-umbrellar surface and inner sub-umbrella surface.

Gastro Vascular system: In the middle of the sub-umbrellar surface a tetra angular mouth is present. It leads into a short gullet within the manubrium. It leads into a wide stomach. This stomach will show 4 gastric pouches on the 4 inter radial positions. In each gastric pouch may gastric filaments are present. These gastric filaments bear cnidoblasts

From the four corners of the mouth 4 oral arms will arise. These arms are long and perradial in position.

On the ventral side of each arm in the middle a ciliated groove is present. This groove leads into mouth. In these groves cnidoblasts are present.

Between two adjacent gastric pouches one perradial canal is present. It is branched. It is also connected with ring canal. 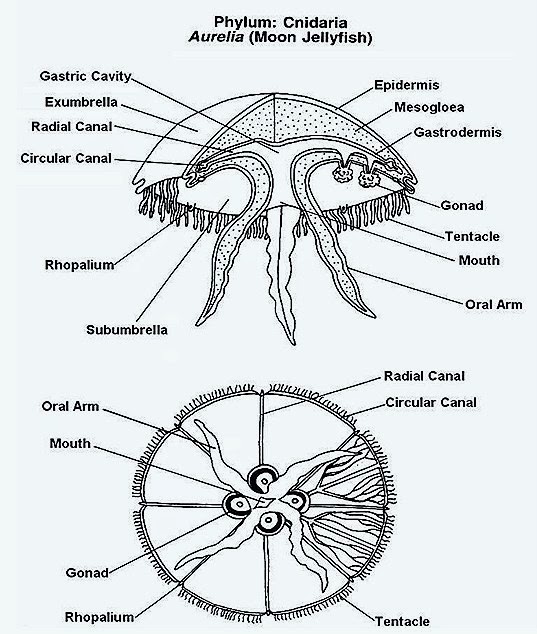 a) Ingestion : Cnidoblasts of the oral arms, and gastric filaments will paralyze and entangle the prey.

c) Absorption: The digested food is distributed to all parts of the body and is utilized.

d) Egestion : The undigested food is sent out through the out-going water.