The word Annelida was first coined by Lamarck. This phylum includes elongated worm like earthworms, nereis leeches etc. They show segmented body.The annelids are distributed all over the world. Nearly 7,000 species are known today. The smallest annelid is Chetogasfer which measures 1 mm in length while the largest annelid is Megascolides australis which measures about 1l feet in length. Many of the annelids are marine but some are terrestrial.

1. The body is elongated and bilaterally symmetrical. Cephaiization is seen. They show metameric segmentation.

2. The body shows segments or metameres, which are arranged one after the other in a linear order.

3. Cuticle is the outer covering of the body. It is secreted by the epidermis.

4. The body wall is dermo-muscular. Muscles are circular and longitudinal.

5. The locomotary organs are groups of chitinous setae or chaetae, embedded in setigerous sacs. 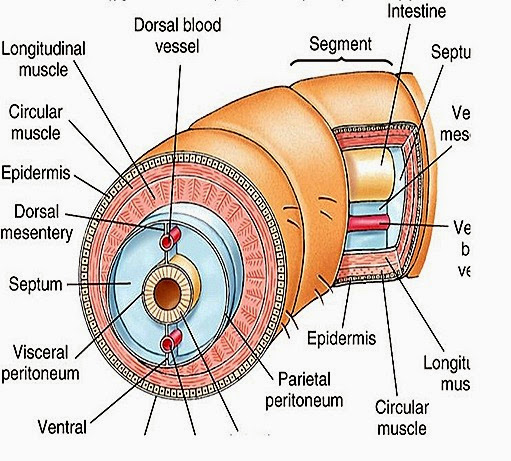 6. The body is triploblastic with Ectoderms Mesoderm and Endoderm layers.

7. Annelids are true coelomate animals. Coelome is a spacious cavity, except in leeches in which it is filled with botryoidal tissue.

8. The alimentary canal is a straight tube starting with mouth at the anterior end, and ends with anus, at the posterior end of the body.

9. Digestion is extracellular. The respiration is through general body surface by diffusion.

10. The blood-vascular system is well developed and closed type.

11. The blood is red coloured fluid with haemoglobin dissolved in plasma.

12. The excretory system consists of the nephridia, which are segmentally arranged.

13. The nervous system consists of nerve ring around the pharynx, and .i doubly ventral nerve cord is seen extending the entire length of the body.

14. Asexual reproduction is seen in many species.

15. In hermaphrodite animals the development is direct.

The following classification is based on Parker and Haswell's system.

All are marine. Segments show well developed lateral outgrowths, called parapodia, with many setae. A distinct head is present with eyes, tentacles, cirri and palps. Sexes are separate Trochophore larva is seen. This is divided into 2 sub classes.

Free swimming forms are included. Segments are many and similar. Head shows a prostomium with sensory appendages. Parapodia are well developed with acicula.

Body includes 2 or more regions, which are dissimilar. Prostomium is small. Parapodia are small, without acicula. Pharynx is non-protrusible. Jaws and teeth are also seen. They live in burrows or tubes.

It is a minor group including few genera. They are marine worms. They do not show seate or parapodia. Segmentation is internal. They are unisexual or hermaphrodite. Their larval form is a trochophore. Some zoologists consider Archiannelida is a class of Annelida.

Fresh water and terrestrial worms are included. They do not show parapodia. Head is not distinct. Setae are in each segment. Clitellum is present. All are bisexual animals. Development is direct. This is divided into 4 orders.

Male gonopores are seen on the segment following the testis. Spermathe-cae are present in the region of the genital segments.

Male gonopores are seen on the segment following the tests. Spermathe-cae are considerably in front of the genital segments.

Male gonopores in same segment with the last pair of testis. Aquatic worms.

Male gonophores are present atleast one segment behind the last pair or of testis. Aquatic or terrestrial animals are included.

Fresh water, marine or terrestrial worms. They are parasitic or predators. Body is depressed, made with fixed number of smaU segments (33) which are externally divided by secondary annulli. Setae are absent. Usually the suckers are present. Coelome is much reduced, coebme is filled with botryoidal tissue. Bisexual animals and fertilization is internal. It is divided into 4 orders.

Jawless leeches with a protrusible proboses are included in this order. Colourless blood is seen. They are aquatic worms. 1

Jaws and teeth are absent, fresh water or amphibious leeches.