The super class Gnathostomata includes craniates, in which one pair of the visceral arches is modified into this jaws. They how internal ear with three semi-circular canals and provided with paired 4, apdages (fins or limbs). Sexes are separate. The super class is divided into, two groups.

Muller, Goodrich. Berg, Romer etc, classified the Pisces. There is no agreement among many authors with respect to the classification of fishes.

2) They are all armored fishes. Their exoskeleton Is in the form of bony plates or shields.

3) Their endoskeleton is bony:

5) The autodiastylic jaw suspension is seen in these fishes.

7) Hyoid arch will not support the jaws.

9) They survived up to Permian period of Paleozoic era. 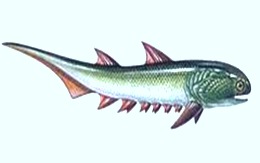 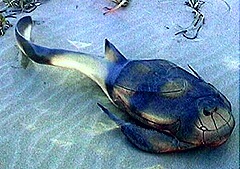 1) These fishes are exclusively marine.

2) The exoskeleton in the form of placoid scales.

3) Their endoskeleton is cartilagenous and are called Cartilage

6) External gill openings are separate. They are not covered by operculum.

9) Air-bladder is absent in these fishes.

The Class Elasmobranchi is divided into two sub-classes.

In these fishes the pectoral fin has cartilagenous rods. Fins are well developed. The caudal fin is hetetocercal. This subclass has four orders in which only two are living.

It is represented by few living species.

2) These fishes are exclusively marine.

3) 5 pairs of gill slits. They open separately. It is divided into two

1) Gill slits on the lateral sides of the body.

3) It includes sharks and dog fishes.

1) It includes skates And Rays.

2) The body is flattened dorso-ventrally.

3) Pectoral fins are enormously expanded anterio posteriorly and gill openings are ventral and five in number.

4) Dorsal fins, if present are seen on the tail.

It includes fossil and modern chimaeras.

1. Mouth is small and bounded by lips.

4. Male possesses a frontal clasper on the head.

It is divided into 2 orders.

It includes chimaera. These are called devil fishes. Chimaera

1. These fishes are marine, fresh water and bracldsh water niem hers.

2. Cycloid, ctenoid or ganoid scales will form the exoskeleton.

This class is divided Into two sub-classes.

In this sub-class bony fishes are Included which show lobed and massive fins. The sub-class includes two orders,

This order includes extinct fishes. But in 1938 one coelacanth fish was caught. This was identified as, Rhipidistian fish by Miss. Latimer. The fish is called Latimeria. It is the oldest living fossil.

This order Includes living fishes. In the present day only 3 genera are living. They show discontinuous distribution.

These fishes will live in fresh water or marine water. They not show internal nostrils. This subclass is divided into three super orders.

This super order includes 3 orders, only fishes of one order or surving

Nasal opening at the end of the much elongate snout. Caudal fin is abbreviate heterocercal.

Super order III. Telosteti : This is a very important super order. It includes nearly 25,000 species. They are divided into many orders. 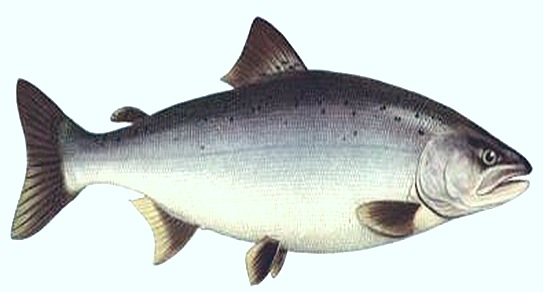 Order 2. Cypriniformes: Weberian ossicles connecting the ear with air bladder is present. Mr-bladder is connected with duct to the alimentary canaL

Order 3. Anguilllformes. : Body eel like, air-bladder, If present connected with intestine by a duct.

Order 4. Beloniformes :Physoclistic fishes in which fins are without spines.

Order-5. Syngnathlformes: Physoclistic fishes In which the first dorsal fin, If present, Is spinous.

Order 8. Pleuronectiformes. Both eyes are situated on one side skull is asymmetilcal. Fins usually without spine. Adults without air bladder.

Order 9. Echenelformes The spinous dorsal fin is t into an adhesive disc placed on the head. Air bladder is absent.

Order 10. Ophiocephaliformes: Physoclisfic fishes in which are Without spine, scales are cycloid, air bladder is very long.

Order 12. Gadiformes Physoclistic fishes in which fins are without spines, scales cycloid.