In the cytoplasm of the cell complex membrane bounded system is present. It was called cytoplasmic vacuolar system by "Sacz & De robertis" in 1975. This system contains endoplasmic reticule, nuclear envelop, and Golgi. 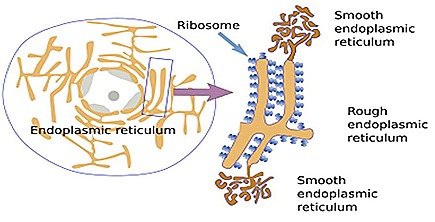 Smooth E.R..- The E.R. without ribosomes is called smooth E.R. This is present in cells which synthesis steroids. In intestine cell, liver cells, retinal cells it is present.

Morphology: E.R. is represented in three forms; a) Cisternae b) Vesicles c) Tubules.

a) Cisternae : These are long unbranched flat structures. They are arranged parallely. They show 40 to 50 mill microns in diameter. They are more in liver pancreas, brain cells, etc.

b) Vesicles : They are oval membrane bounded structures. They are 25 to 500 mill microns in diameter. They occur in liver and pancreatic cells.

c) Tubules : They are small and branched. They show 50 to 190 mill microns in diameter. They are arranged irregularly in cell. They are seen in almost all the cells.

Biogenesis of E.R. : The origin and development of E.R. is not clearly

3) Multistep mechanism: Rough E.R. is developed in the following way. a) Annulated lamellae: It was reported by "Meculloch" in 1952. From the nuclear membrane small structures are liberated as buds. They unite to form annulate lamellae. These lamellae are united to form cisternae. Thus E.R. is formed.

3) Protein synthesis : ER. will provide surface for the attachment of ribosomes. These ribosomes will synthesise the proteins.

4) Synthesis of lipoproteins : Smooth E.R. will synthesise lipids. In the Golgi complex the glycerides get associated with proteins produced by the E.R. Thus complex lipoproteins are formed.

7) Formation of other membranes : In the cell E.R. gives rise to.

a) Cisternae of Golgi apparatus .

b) Outer membrane of nucleus.

8) impulse conduction : In the muscle sarcoplasmic eticulum will release calcium which is responsible for the muscle action In 1926 "Porter" stated that E.R. membrane shows ionic grandients, and electric potential.

1) The outer membrane of the nucleus will give buds. They unite to form annulate lamellae.

2) Annulate lamellae will give rough E.R.

4) Vesicles will give plasma lemma.

5)According to GERL system Golgi will give rise to primary lysosomes. Thus there is an interrelationship among the membrane systems.