The Study of the developmental stages of an organism is called If we observe the embryos of different animals, there is a similarity. This similarity tells us that there is a relationship between the animals. The embryological evidences show support to organic evolution.

All multi cellular organisms begin their life as a single celled stage, namely Zygote. It undergoes cleavage to produce the first embryo, called morula. It develops into a single layered second embryo, called blastula. This embryo develops into a third embryo called gastrula. This embryo develops into adult. The Zygote represents the unicellular stage. Morula and blastula represent the colonial protozoan stages. Whereas gastrula represents the coelenterate stage. The embryos of organisms differ after the gastrula stage. The sequence of embryos shows that every multi cellular organism passes through the above stages representing their ancestors.

Von Baer proposed these principles by studying the embryology of Fish, Frog, Tortoise, Pigeon, Chimpanzee and Man. The early embryos of above animals resemble with each other closely. That it is impossible to separate if the embryos were mixed. But the embryos differ in the final stages clue to the formation of specialized characters. The similarity of early embryos tells that the above animals have common ancestors. The embryological principles are

2. The special character appear in the last embryos.

3. The embryos of closely related individuals are almost similar up to the end with small differences.

4. The embryos of one organism resembles to the embryos o f its ancestors but not with adults. 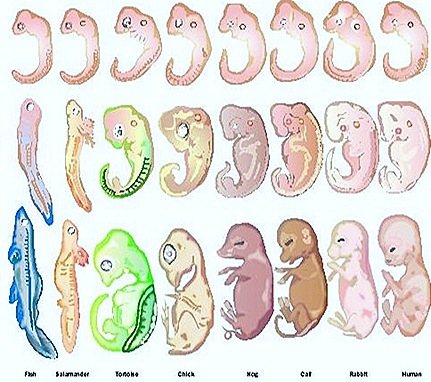 It was proposed by Earnest Haeckel .

Biogenetic law states that every organism recapitulates its ancestors through the embryos. In other words the ontogeny of an individual repeats its phylogeny. The biogenetic law is also called recapitulation theory.

I. Tad pole larva of Frog:

The tad pole larva resembles fish both externally and internally. It contains two chambered heart, respires with gills like Fish. Later tad pole larva metamorphoses into adult Frog. Frog recapitulates its closet ancestor, fish through the tad pole larva. It also indicates that the Frog was evolved, from fish.

This larva resembles to annelid. Butterfly recapitulates its closest ancestor, annelid through the caterpillar larva. It alsc tells us that the Butter fly was evolved from annelid.

iii. Development of ‘4’ chambered heart in the embryos of Birds and Mammals:

Likewise the recapitulation is also observed in the development of brain, aortic arches, kidneys etc.

A. Formation of gill slits in the embryos of reptiles, birds and mammals.

B. Formation of teeth in the embryos of pigeon and whale.

C. Formation of limbs in the embryos of snakes.

D. Formation of tail in the embryo of human beings.

These structures are of no use in the embryos. But their presence explains the biogenetic law.