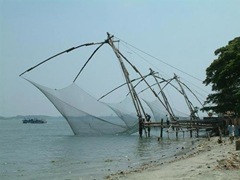 Man developed the idea of growing selected fish. For this purpose, the fishes such as carps breeding in flowing waters are collected. They are artificially induced to breed in confined water bodies. The pituitary gland extract is injected to the breeders. The breeders under the influence of pituitary hormones, breed in these waters. This method is called induced breeding. The fish hatchlings thus obtained are called fish seed.

While growing the fish seed, man is also able to control the environmental conditions. He is able to supply additional food for their growth. The diseases common for fishes are controlled. Due to this, better growth of fishes is achieved. Ultimately, he is also able to grow more number of fish and achieved better production of fish. This method of growing selected fish under controlled environmental conditions in confined water bodies so as to achieve maximum productivity is termed as

The culture fishery is also of two types viz.,

Molluscans, Crustaceans such as crabs, lobsters and prawns constitute shell fish fishery.
The culture of fin fishes is also termed as pisci culture. The culture of any aquatic food organisms can be referred to as aquaculture.

Our state, Andhra Pradesh is situated along the east coast. It has 932 kilometers long coastal line and an area of 32,000 sq. miles of marine water. Several rivers such as Godavari, Krishna and Penna are flowing into the Bay of Bengal. Lake Kolleru, one of the biggest fresh water lakes, is located in Andhra Pradesh. Forty thousand ponds and 60 reservoirs are spread all over the Andhra Pradesh. An area of about 0.5 million hectares of fresh water is available in A.P. The brackish water areas spread to about 60,000 hectares. All these areas can be used for aquaculture.

The fish not only yields flesh but also vitamins like A and D. Due to less cholesterol content the fish flesh is used as food for heart.