A polymorphic colony contains many individuals called zooids. They are mainly two types.

Polyp is sedentary. It shows mouth and tentacles at the free end. The medusa is free swarming. Hydra is a Monomoiphic form. It is represented by polyp form. It performs all functions. Obelia like animals Show two forms, polyp nutritive zooid and medusa reproductive zooid. This is called dimorphic organism In a colony of obelia

The polymorphic tendency reached its peak in coelenterate organisms belonging to order 'Siphanophora' of class 'Hydrozoa'. Many siphonophora organisms will show complicated structures.

Structure of a typical Siphonophora organism: 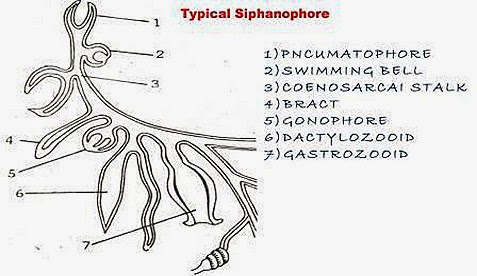 In Hydrozoan coelenterates polymorphic tendency is well developed. The order Siphonophora organisms are exhibiting this tendency to a maximum extent. In a generabsed siphonophora organism several forms are seen. These forms or zooids are developed from polyps or medusae. These individual zooids are attached to a common stalk called Coenosarc.

1. Gastrozooids : The nutritive polyps are called gastro zooids. They alone take up nutrition in the colony. They are tubular. A mouth is present at the tip of the hypostome. Near the base of a gastrozooid usually a single, long and contractile tentacle arises. It shows batteries of nematocysts. Lateral branches are present called tentilla. Gastrozooids catch the prey and digest it. The digested food is thrown into the coenosarcal canal.

2. Dactylo zooids : They are called Palpons, feelers or tasters. They resemble the gastrozooids. They do not show mouth. Their basal tentacle is un branched. In Physalia, the tentacle is very long. In velella and Porpita the margin of the colony bears long and hollow tentacles. These zooids are protective in function. They bear batteries of nematocysts.

1. Pneumatophores : It functions as a float. It is an inverted medusan
bell. The walls are two layered and highly muscular. The epidermal lining
becomes glandular to form a gas gland. The gas gland secretes gas into the air-sac

2)The pneumatophore is very large in Physalia.

3)It is disc-shaped in porpita.

3.Bracts : They are also known as hydrophyllia. They are leaf like. In Halistemma a bract covers the zooids of a cormidium.

In Siphonophora many examples can explain polymorphic tendency.

I. Halistemma: This Siphonophora organism will show the greatestpolymorphic tendency. It is a marine organism. It spims in the sea water. It looks-like a single individual. It floats on the top of the sea water. This animal show many kinds of zooids. These are arranged in the coenosarc which is divisible into 2 parts. 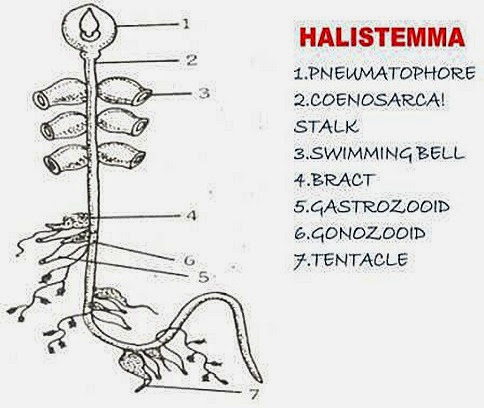 i) Pneumatophores- On the top of the colony a float is present. It is a modified medusoid zooid. It is filled with gas. It is useful to float the cobny on the water.

ii) Swimming bells - Nectocalyces : Below the float a long stalk is present. It is called 'Coenosarcai stalk'. Just below the pneumatophores 3 to5 pairs of swimming bells are present. They are muscular. Because of them the organism swims. These bells are modified Medusae.

1.Bract : It is also called Hydrophillum'. It is a leaf of structure. It will cover other zooids of the cormidium.

2. Gastrozooid : It is a nutritive zooid. It is a modified polyp. It has mouth at its apex. From its base along tentacle will arise. On this tentacle many nematocysts are present. They are helpful in the capturing the prey. The tentacle shows branches called Tentilla'.

3.Gonozooids : It is a reproductive zooid. It produces medusae They take up sexual reproduction.

4. Dactylozooid : It is a modified polyp. It has no mouth. It is a protective zooid. It is defensive in function. At its base a long tentacle is present.

Many such cormidia are arranged on the coenosarcal stalk. Thus Haliste-mma shows the highest degree of polymorphic tendency in Coelenterates.

II. Physalia : It is called Portuguese-Man-of war'. It shows a big float called pneumatophore. Below this pneumatophore stalk is absent. All the zooids are arranged below the float.

Pneumatophore : It is big and colourful. It is filled with gas. It contains gas glands. They secreate gas. With the help of the float the colony floats on the water.

Gastrozooid: It is a modified polyp. It has a mouth at its tip. It has a long tentacle at its base. The tentacle bears nematocysts. They are helpful in capturing the prey.

Dactylozooid : It is a modified polyp. It has a mouth and tentacle. It bears a number of nematocysts. Dactylozooid is defensive in function.

Gonozooid : They produce medusae which take up sexual reproduction.

III. Porpita : This siphonophore organism will show polymorphic nature. The pneumatophore is large and circular. It contains gas chambers inside.

They are separated by partitions. On lower side of the float a big gastrozooid is present. Around the gastrozooid a number of gonozooids are present Gastrozooid is a modified polyp. It has a mouth at its tip. It takes up the function of nutrition.

The gonozooids are useful for reproduction. On the rim or margin of the disc a number of tentaculozooids are present. They are called' Feelers' or Palpons. They are defensive in function. Thus porpita shows polymorphic tendency.

b) Polyperson theory: Vogt and Gegenbaur proposed this theory. According to them siphonophores are polymorphic colonies of modified polyps which can produce medusae.

Hackel. Balfour agreed the colonial nature of a siphonophore but it was developed from a primitive zooid probably a medusa.