The name platyhelminthes was de­rived from the Greek "platys" flat and helminthes worms. Gagenbaur 1859 coined the word platyhelminthes for the flat worms which are considered as the most primitive of all helminthes. This group includes free living or parasitic forms. Minot (1876) separated nemertines from flat-worms and group them as phylum

platyhelminthes. The branch of biology study  of helminthes is known as Helminthology.

1. They are soft bodied, unsegmented worms.

4. The epidermis is soft, syncitial. It is ciliated in Turbellaria. It is covered by cuticle in Trematoda and Cestoda worms.

6. The parasite shows suckers or hooks or both for attachment to the host body. 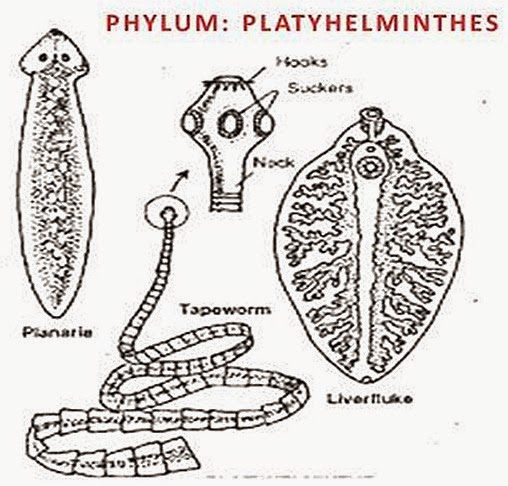 7. They are the first animals to illustrate the development of organ system.

8. A true body cavity or coelome is absent, and the space between the body organs is filled with loose parenchyma.

9.Muscular system is well developed. It is mesenchymal in origin. The system consists of circular, longitudinal and oblique muscles beneath the epidermis.

10. The alimentary canal is either absent or highly branched. Anus is absent.

11. Circulatory and respiratory systems are absent.

12. Excretory system consists of flame bulbs or flame cells or protonephridia connected to the excretory ducts.

13. Asexual multiplication and alternation of generations are seen in some examples.

16. Fertilization is internal and development may be direct or indirect.

17. May be free living (Turbellaria), ectoparasitic or endoparasitic. A few may be commensals.