This is commonly called catla. It is the largest carp with grayish colour above and silvery on sides. It grows to about one meter. It has broad and stout body, broad head with upturned mouth, prominent lips and elongated fins. The dorsal side of the body is more concave than ventral side. It occurs in surface water. It matures by second year. slender fish. Body is silvery but dark gray along its back.

This fish is commonly called rohu. It has an elongated body. Head is small but it is with a prominent terminal mouth, thick lips with short barbels. Colour is bluish or brownish gray above. Scales are gray and red or black. It grows to about 90 cms. This carp occurs in column waters of all rivers and canals. The above major carps are extensively cultured in fresh water ponds and lakes of India.

The minor carp fishes grow to a size of 30- 100cm. with an average weight of 1 to 1.5 kg. Rate of egg production is very low in these fishes. 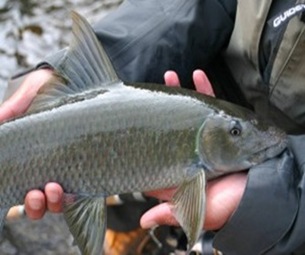 It is commonly found in fresh water ponds and tanks of India. The body is bluish green in colour with small head and folded lips. The snout consists of four black coloured long barbs. It is cultarable in ponds. It reaches to a size of 1 m and l .5 to 2 kg. in weight.

It is grown in compositefish culture along with other Indian major carps. It attains sexual maturity in 9 - 10 months.

It has folded lips and lives in deep water zone. It grows to a maximum size of 90 cm and 450 g. in weight. Red spots are present on the scales of middle row.

These are air breathing fishes with long cylindrical body, flattened head and protractile mouth. These can grow in fresh water ponds, irrigation canals, wells and marshy areas. They breed even before the onset fo monsoons.

It is a long fish with snake like body and accessory respiratory organs. As it lives outside the water also, it is commonly called Livefish. It is coloured differently. It grows to an average length of 30 - 35 cm. It is a common food fish of high demand.

The body is coloured dark brown with yellow bands on either side. The fish feeds on worms and insects and grows to a length of 0.9 mt. Its flesh is good for health as it does not contain cholesterol.

It is also used for culture in fresh water ponds and tanks.

The cat fishes are predatory fishes. Their skin is devoid of scales. Two pairs of barbels are present on upper and lower jaw. Most of the fish body is utilized as food due to absence of scales and spines.

It is commonly found in brackish and fresh water ponds of India, South and West Asian countries. Head is slightly compressed and enclosed by plates. Body is brown or dark gray in colour. It is not only used as food but also for experiments in laboratories. It is provided with Accessory respiratory organ. It grows to a size of 45 cm.

The head is flat with laterally compressed body. It possesses accessory respiratory organs and lives in lake kolleru of A.P. It feeds on molluscans, algae and grows to a size of 45 cm.

It grows to a length of 15cm and feeds on aquatic insects. head is triangular with wide mouth and greenish in colour

It is commonly called pearl spot due to presence of transparent patches shining like pearls. The body is greenish, light pink and possesses eight black stripes. It is regarded as a good food fish due to delicious smell. It is not a predator, builds nests during the breeding season and hence regarded as most suitable for culture in ponds and lakes.

It is a cat fish found in all rivers and lakes of India. Head is larger than trunk.

The body is laterally compressed. Tail is extraordinarily long and slender. It grows to a size of ito 2 mt. but captured at 90 cm. length. Two pairs of barbells are present on the head. Mouth is large with large jaws having teeth for feeding on fresh water. Hence it is called fresh water shark. As it is a predator fish, it is not suitable for artificial culture.

When the indigenous fishnet are not favored for culture due to economic viability, exotic breeds are selected and cultured. These fishes yield nutritious food and earn foreign exchange. 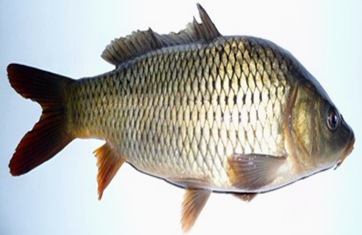 This fish was imported from China and introduced into Nilagiri lakes. The growth of the fish is higher and grows to a length of 75cm and 6.5 kg weight. It breeds thrice in a year. When cultured under extensive system, the productivity was at 1500 kg/ha.

It was imported from Jawa and Maritius and introduced into fresh waters of Madras and Calcutta. The rate of growth is very slow.

It grows in fresh water, polluted water and brackish water of low salinity. It feeds on aquatic weeds and used to eliminate them. It is native of Japan and China and was introduced into Cuttack waters in 1959. It can grow to a size of 0.9m in size and 7kg in weight.

It was imported from Hongkong and introduced into fresh water of Cuttack  region. The mouth is located dorsally at the tip of snout, the body is laterally compressed and enclosed by small shiny scales. It feeds on the left over food particles of carp fish and grows quickly. It reaches to a length of 60 cm and weighs about 1.5 kg.

It was imported from East Africa in 1952. The upper jaw in males is larger. It breeds even at the age of two months.

It is a north American fish introduced into rivers and lakes of Ooty and bill ranges of kerala. The dorsal and caudal fins are pinkish with dark spots. It grows to a length of 1 .8m. and weigh upto 100kg..

Head possess short rosiral and long maxillary barbs. Dorsal ride of the body is grayish green, lateral sides are gold and belly is silvery white. Even though it is adapted to grow well in canals but now it is cultured in reservoirs like Bakranangal. It grows to a size of 1 mt. and considered as good food fish.

Snout is pointed. Body dark coloured on dorsal and lateral sides while yellow on ventrolateral sides.

It is the native of Europe and West Siberia and was introduced in Indian waters. It grows to a size of 40cm.

The great estuaries on river mouths and backwaters offer important potential for fish culture of particulate species. The fishes generally reared in brackish water include some iidigenous fish like Mugil cephalus, Chanoschanos, Etroplussuratensis,Latescalcarifer and some exotic species like Tilapia mossambica, Osphronemus goramy etc.

Although these fishes are available on the coastal region, they enter into brackish waters and rivers. The fish grows to a length of 90cm. It is also reared in ponds in kerala and Tamilnadu. 70”/o of the body is useful as food.

This is commonly known as milk fish. The dorsal side of the body is greenish and shiny. It is mostly obtained in kerala state. It is highly used in brackish water culture and highly preferred food fish.

It is commonly known as perch. It is found in sea water, brackish waters

and also in large rivers. The dorsal side of the body is dark greenish while the ventral side is shiny, It grows to a size of 60cm and may reach to a size of 150cm. It is also highly preferred as food fish.

Salt pans at Neellaravu and Shimunipatnarn (A.P.) are especially useful for culture of prawns and fishes on commercial basis. The culture may be taken up during the period when salt manufacture is suspended that is between June and December.

Oceans cover 71% of earth’s surface providing rich source of water for fishing. It was estimated that the total marine catch was at 86 million tonnes only in 1986. Marine fisheries are largely of capture type with inshore or coastal and offshore or deep sea fishing techniques.