The leeches are common in tem­perate parts of the world. The common cattle leech is found in India, Burma, Ceylon. It is found in lakes, ditches, ponds and slow moving streams. It is sanguivorous parasite, (feeds on the blood of cattle). H. granulosa, H. manillensis, H.javanica, H. viridis are different species met with the genus. leech body consists various kinds of parasitic adaptations for sucking blood from their hosts.

i) Shape and size: Hirudinaria is soft, vermiform, elongated and dorsi ventrally flattened worm. It is 10 to 15 cm long. The body is broad near the posterior and while narrow near the anterior end. The dorsal surface is somewhat convex and the ventral surface is more or less flat.

ii)Colouration : The body of the leech is brightly colored. The dorsal surface is olive-green; the ventral surface is orange-yellow in color. Distinct stripes are seen on the body.

iii) Segmentation of the body: The body is divided into 33 segments. Externally it is divided into more segments which are called annuli. There are 109 annuli in a leech. The number of annuli varies in different segments. A typical segment of the middle part of the body includes five annuli. 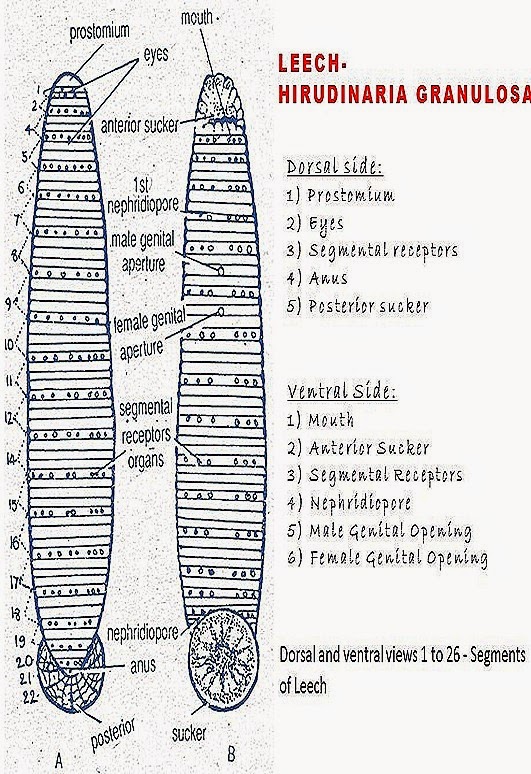 v) Regions of the Body: The entire body is divided into 6 regions.

4) Middle region: It consists of 12 to 26 segments all show 5 annuli and pairs of nephridiopores.

5) Caudal region: It contains 23 to 26 segments the 23rd segment has three annuli and segments 24, 25 and 26 have two annuli each. On the 26th segment anus is present dorsally.

1) Mouth: Mouth is a triradiate aperture present in the anterior sucker.

2) Nephridiopores : 17 pairs of nephridiopores are present. One pair lies ventrally on the last annulus of each segment from 6 to 22 segments.

5) Anus: Anus is a small opening present mid-dorsally on the 26th segment at the base of posterior sucker.