Palaemon is a unisexual animal. Male and Female animals shows many morphological differences.

The male prawn has a well-developed male reproductive system, it has the following parts.

a) Testis: They are two in num­ber. They are long and narrow. They are present on the posterior half of the hepato-pancreas and beneath the pericardial sinus and heart. Anteriorly they extend up to the renal sac and posteriorly they run upto the first abdominal segment. In between the two testes a gap is present in the middle. Through this gap cardio-pyloric strand passes. 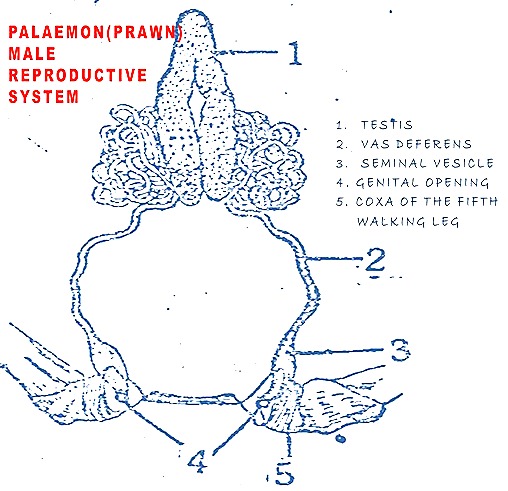 Each testis is composed of a many lobules and which are connected by connective tissue. The lobule is fined by germinal epithelium.

b) Vasa deferentia: From each testis a vas deferens arises, k is a long narrow duct. It coils near the hepato-pancreas. It runs vertically downwards.

c) Seminal vesicle: The lower part of the vas deferens is expanded. It is club shaped and muscular. It is called seminal vesicle. It stores the spermato-phores.

d) Male genital openings : The seminal vesicles open out through male genital pores. These openings are situated on the arthrodial membranes of the last pair of walking legs. Each opening is guarded by a small flap.

a) Ovaries: These are present on the posterior half of the hepatopan-creas below the pericardial sinus and heart. They extend anteriorly up to the renal sac and posteriorly up to the first abdominal segment. In a mature female, the ovaries are sickle shaped and lie side by side, with a big gap between them in the middle. Cardiopybric strand passes through it. In the breeding season the ovaries enlarge and may extend into the first abdominal segment. Each ovary has a large number of ova surrounded by a membrane. The ova are in the different stages of development in the ovary.

b) Oviducts: These are slender and curved tubes. They have a wide proximal end. Each oviduct starts from the middle of the outer border of the ovary. It runs vertically downwards.

c) Female genital aperture: The oviducts open out through female genital opening. They are present on the coxa of the third pair of walking legs.

Development: In Palaemon the devebpment is direct. The larval stage is absent. The eggs hatch and give small prawns which undergo many moultings before becoming adults.