The ability of the organisms to resist almost all types of toxins that damage the tissues and organs is called Immunity. The study of resistance towards disease is called Immunology. Protection against infectious disease is immune response which is concerned with the reaction of the body against foreign antigen.

Immunity against infectious diseases is of two important types viz.

Innate or native immunity is the resistance to infections which an individual possesses by virtue of his genetic and constitutional make up. It is not affected by prior contact with microorganisms or immunisation. The various organs in human body like epithelial surface, blood and tissues are naturally adapted for exhibiting immunity. Natural defence in the body is also mediated by 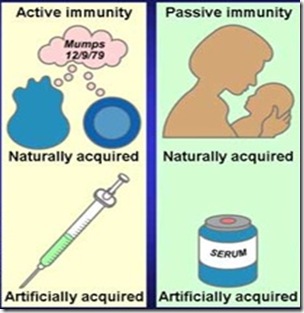 If the resistance is developed as a result of an antigenic stimulus, it is called Active Immunity. For example a person who has recovered from an attack of measles develops Natural immunity.

If the resistance is transmitted to a recipient in a readymade form, it is known as passive immunity.

The acquired immunity is also of two types namely

The cell mediated immune system is carried out by highly specialsed cells, which work against pathogens, including fungi and protista that have invaded host cells. The system also reacts against transplants. It is thought to be important in protecting the body from its own cells if they become cancerous.