1. It is colorless watery fluid.

3. The respiratory pigments is haemocyanin, hence the blood is bright blue in color when combined with oxygen. It is colorless when de-oxygenated.

5. Blood has the capacity of clotting.

Dorsal sinus: The heart is dorsally placed in the posterior part of thorax. It is enclosed in a chamber called the dorsal sinus or pericardium. It is present above the hepato pancreas and the gonad. It shows a thin septum on the floor. The septum is attached to the dorsal body wall and to the thoracic wall.

Heart: It is a muscular organ. Its apex is directed anteriorly. Broad base is directed posteriorly.

Cardio-pyloric strand and two lateral strands will keep the heart in position inside the pericardium. On the wall of heart five pairs of valvular Ostia are present. Blood from dorsal sinus can enter into the heart through Ostia.

The heart sends blood to the body through the arteries. They are.

a) Median ophthalmic arteries: It arises from the apex of the heart. It runs forward mid-dorsally to head. It joins the two antennary arteries above the oesophagus in cephalic region.

b) Antennary arteries: A pair of antennary arteries arises from the apex of the heart on both sides of the median ophthalmic artery. Each artery runs forwards along the outer border of the mandibular muscle. Its branches are

3) A mandibular branch goes to mandibular muscle. Then it divides into a dorsal branch and a ventral branch. The ventral branch gives branches to antennule, the antenna and the renal organ. The dorsal branch gives branches to the eye and then divide. It unites with the same opposite branch and the median ophthalmic to form a circular loop like artery or circulus cephalicus. It gives a pair of rostral arteries to the-rostrum.

Hepatic arteries : They arise' from heart ventro-laterally one on each below the antennary artery. They go to the hepatopancreas.

Circulation of blood: The heart because of contractions forces the blood through the arteries to all parts of the body. Blood from all sinuses will return to two ventral sinuses. From there the blood is distributed to the gills by afferent bronchial channels and then it reaches the pericardial sinus through efferent bronchial channels and reach heart. 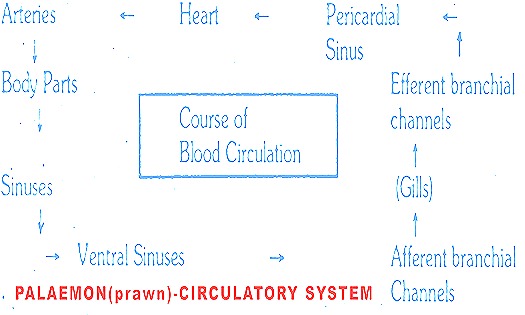