a) Peyssonel regarded the sponges as houses of worms.

b) Ellis (1765) observed water currents in these organisms.

c) Linnaeus, Lamarck and Cuvier placed them under Zoophyta.

d) Robert Grant (1836) coined the word Porifera and kept Sponges in it.

2. Some of them show radial symmetry, but a few are asymmetrical.

3. These are cellular grade metozoan animals.

4. They are mainly marine, but 'spongillidae' is a fresh water family.

5. Poriferans may show different colours because of lipochrome in chromocyte ccDs. 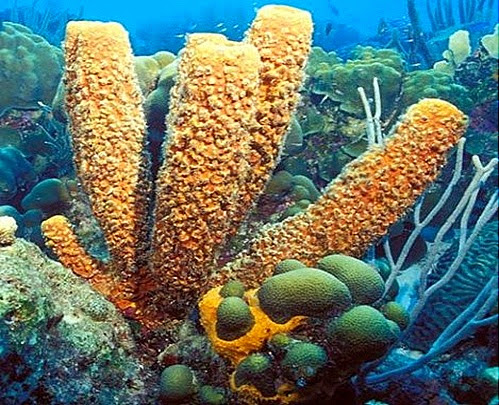 6. Poriferans are diploblastic animals, they show outer pinacoderm, (dermal layer), inner choanoderm gastral layer) and in between them mesenchyme is present.The mesenchyme contains Amoebocytes and Spicules.

7. On the body of sponges a number of dermal ostia are present.

8.In sponges the centre of the body paragastric cavity is present.

9.The skeletal system of sponges include spicules. They are made by CaC03 or silicon or spongin.

10. In the body of sponges canal system is present. By the action of flagella water current is brought in. It is called incurrent water current. It is respiratory and nutritive. The water that flows out through oscudum is called excurrent water. It takes away waste materials.

11. The choanocytes or collar cells will filter the water and-catch the prey. They digest the food. They are nutritive cells.

13. The archaeocytes will produce sex cells.

14. Asexual reproduction is carried on by budding, gemmule formation etc.

15. Porifera animals are bisexual and protandrous. Fertilization is internal.

16. in sponges two types of larva are seen, parenchymula and amphiblastula larva.