Echinoderms are unisexual animals. Sexual dimorphism is absent. Fertilisation takes place in water. The development may be direct or indirect. If the development is indirect it includes larva stages. In different classes of echinoderms, different types of larvae complete the development. The larval form is bilaterally symmetrical. It undergoes metamorphosis and radial symmetri­cal adult is developed.

It is the larva form seen in the life history of Star fish. The fertilised egg is homolecithal. ft undergoes hobblastic cleavage and devebps into blastula and gastrula stages. The gastrula elongates in length and it gives rise to Bipinnaria larva. 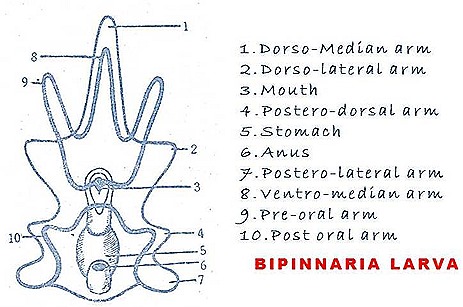 1. It is a bilaterally symmetrical free swimming pelagic larva.

The ciliated band at the pre-iral lobe 'orms into 2 separate bands, Pre-oral band of cilia, and post oral band of cilia. These 2 bands of cilia are drawn into many arms. They are nothing to do with the arms of the star fish. They are,

4) A pair of antero-dorsai arm. 5; A pair of posterio-dorsal arm.

6) A pair of posterio-lateral arm.

8) The digestive system is developed with mouth and anus. This larva resembles Tomaria larva of Balanoglossus.

This larva slowly grow s into the next larval form called Brachiolaria larva.

1) It is bilaterally symmetrical larva.

2) It is pelagic larval form, it shows 3 brachiolar arms with suckers. They are one median and two lateral in position. 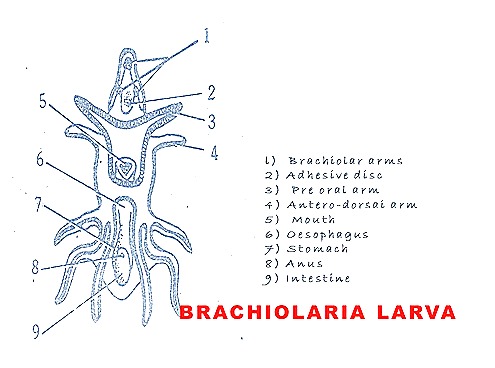 3) At the tip of brachiolar arms adhesive structures will make their appear­ance and they are for attachment.

4) The larva shows all the arms that areseen in the Bipinnaria, but these arms are very long and hanging. These ciliated arms will be helpful for swimming in the water.

5) The digestive system is completely developed with definite stomach and intestine.

This larva after swimming few settle-on a solid object and gets attached to it by its adhesive arms. Posterior end of the larva enlarges and lifts to the right-side. From this rudiments of 5 arms will arise. Thus slowly the larva metamorpho­sis into an adult.

3. Auricularia Larva : In Holothuroidea this larval form is seen.

1. It is a free swimming pelagic larva.

2. Arms are absent. Alimentary canal is developed. It opens with mouth and ends with anus. 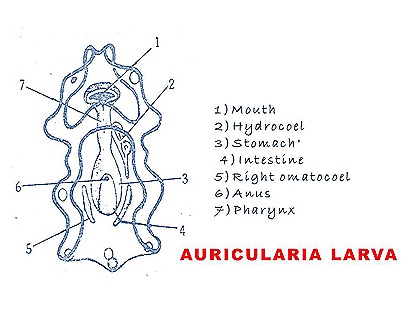 4. In Japan and Bermuda very big auricularia larval forms are developed. They are 15 mm in length. Usually this larva is 1 mm in length.

4. Ophiopluteus larva : This larva is seen in the life history of opuriodea (Brittle star). It shows many long arms. It is bilaterally symmetrical. It is transparent. It is Pelagic. The arms are supported by calcareous rods. The arms are directed upwards. Preoral loop is reduced . Ciliated band is undivided. The posterc-lateral arms are very long and they are directed forwards. The digestive system is developed. It opens with mouth and ends with anus. This larva swims for some timebefore undergoing metamorphosis. 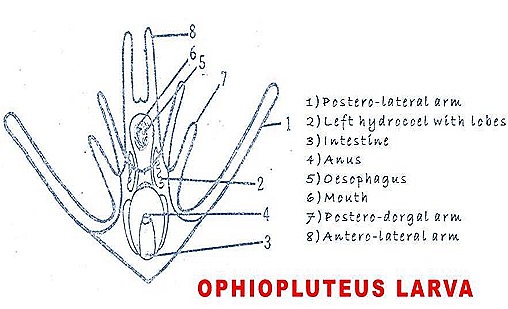 Echinopluteus larva : It is seen in the life history of Echinoidea.

1. It is a microscopic larva.

3. This larva shows ciliated bands which are developed into arms. 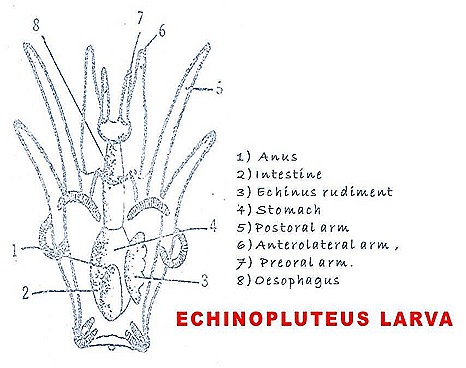 5. The arms are supported by (CaC03) Calcareous rods.

6. The digestive system is developed which shows mouth and anus.

7. It develops hydrocoel and vestibule. These parts grow on the oral side of the animal. From the hydrocoel five radial canals will develop.

This larva undergoes rapid metamorphosis and develops into an adult.

In crinoidea group of animals the larval form is Doliolaria larva.

1. It is a free swimming larval form.

2. It contains an apical tuft of cilia which will be sensory.

3. On the mid ventral line near apical plate adhesive pit will be present.

5. In between 3rd and 2nd ciliated bands vestibule is present. 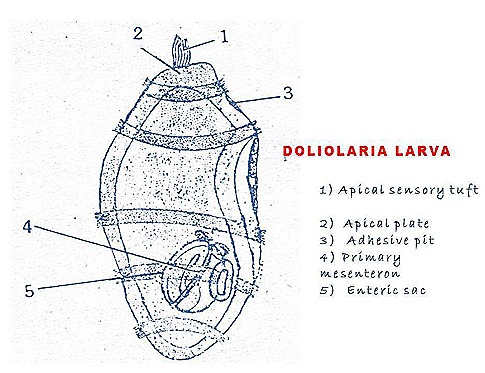 After swimming for some time it will develop a stalk. It is called Pantacrinoid larva. It will attach to the substartum. The internal organs will rotate at 90°. It develops into an adult.

Significance of Echinoderm larva : The larval forms of all classes in Echinodermata will show general resemblance. The crinoidea larva differs from this pattern. In general all the larvae show that they might have come from same ancestor. Hence the common ancestor is coelomate, bilaterally symmetrical and free swimming.

These larvae also show resemblance with Toronaria of Balanoglossus. Thus the study of Echinoderm larva has a phylogenetic significance.