In Echinoderms a peculiar system is met with. It is filled with sea water, it is called water vascular system or Ambulacral system. The entire system is lined with ciliated epithelium. This system is well developed in Asteroidea. It con­tains Madreporite, stone canal, ring canal, 5 radial canals, Tiedemann's bodies, lat­eral canals and tube feet.

Madreporite: A calcareous plate like structure is present on the aboral surface of the central disc of star fish. It is placed near to two arms and these two arms are called 'Biviurrr.' On surface of the madreporite grooves of furrows are present. Each furrow contains a number of pores. Hence it is called serve plate. These pores led into small canal which open into a stone canal.

Stone Canal: It is a 'S' shaped canal, it is called Madreporic canal. It travels towards the oral side on unite with ring canal at one of inter radius. The walls of stone canal are strengthened by calcarious rings. The inner surface of stone canal is lined with flagellated cells. The movement of flagelia will draw water currents into the stone canal. The wall of the stone canal shows a ridge on one side called 'Lamellated ridge.'

Ring Canal: It is penta - radial and is present arround the mouth, on the oral side. At each inner radius, it shows poiian vesicles and Tiedemann's bodies.

Lateral canals From the radial canal of each arm pairs of lateral canals will arise and they end with tube feet. 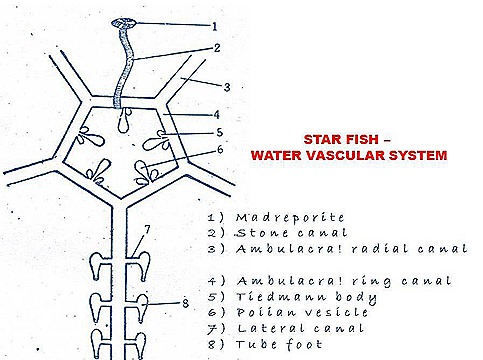 Functions of Water vascular System: his mainly used for locomotion and food collection.

1) Locomotor function: The contraction of ampulla extends the tube feet. The tube feet will emerge out of the arm and attaches to the substratum with the help of suckers. The water from ampulla will never enter into lateral canal because of the presence of valves.

The longitudinal muscles of the tube feet will contract and the animal is pulled forward and the Podia becomes short. The fluid is drawn back into the ampulla. Thus relaxation and contraction of tube feet will bring locomotory movement in Star fish. Usually the locomotion is carried on by tube feet of one or two arms in one direction only.

2) Food collection : In order to open the shell valves of the rndhrscan, Star fish utilises its tube feet.-Then it feeds the soft material of Molluscan animals.