The theories which we have discussed are imaginary. There is no practical proof for them. The various animals which we are seeing to-day were gradually evolved from simple past lived organisms. It is not possible for anybody to observe a single change, because our life span is too short. Hence scientists collected evidences from different branches of biology. They are,

The organs of different individuals are classified into three types. They are homologous, analogous and vestigial organs.

The organs which have common origin and structure are called homologous organs.

E. Example - v: Thorn of Bougainvillea and tendril of Cucurbit. 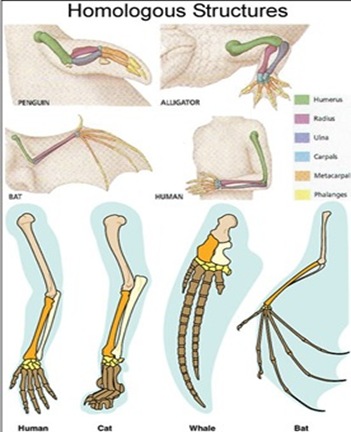 The organs which have common form and function are called analogous organs. But they must differ in origin and structure.

B. Example -ii: Scales of Fishes and Reptiles.

The organs which are non functional and reduced in an organism are  called vestigial organs. But these organs were well developed and performed functions in ancestors. The organs become functionless when the animals enter into new habitat or when their function is taken up by another organ or when the habits are changed. Presence of vestigial organs is the most convincing evidence in favour of

organic evolution and is also supported by the disuse principle of Lamarck.

A. Vestigial organs of Man:

B. In man there are nearly 180 different types of vestigeal organs. Hence Welder Sheim described human being as moving museum of variable antiquities.

If human baby born with many pairs of mammary glands, except one pair other pairs are considered as atavistic organs.

A. Peripatus: It consists of nephridia like annelids and trachea like arthropods. Hence peripatus is considered as living connecting link between annelids and arthoropods. We can also say that annelids evolved into arthropods through the peripatus.

These lay eggs like reptiles and contain mammary glands like mammals. Hence monotremes are considered as connecting inks between reptiles and mammals. We can also say that the reptiles evolved into mammals.