In 1949 Claude observed ribo­somes and called them as microsomes. In 1955 Pallade named them as Ribo­somes.

In both eukaryotic and prokaryotic cells the ribosomes are present.

The number of Ribosomes is directly proportional to the RNA content of the cell. In a liver cell of Rabbit 10s ribosomes are present. 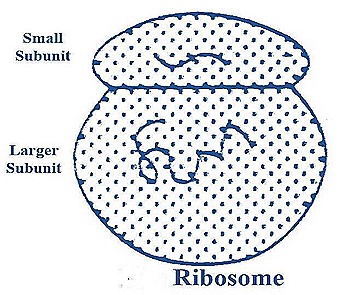 1) Ribosomes of prokaryotes are 70S type.

2) Ribosomes of eukaryotes are SOS type.

Each ribosome is made by two subunits, one is smaller and the other is bigger.

A) Types of Ribosomes :

1) 70S ribosome : These are present in bacteria and prokaryotes. Such 70S ribosomes are also seen in mitochondria and chloroplasts of the cell.

2) 80S ribosome : They are present in eukaryotic cells. They are comparatively larger than 70S ribosomes. 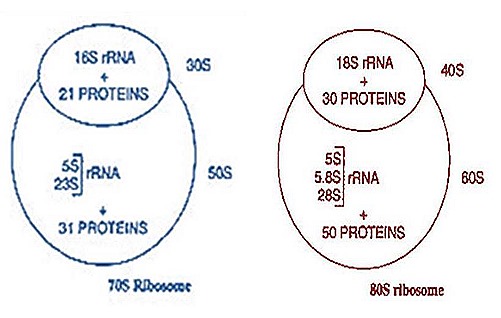 Chemical composition: Ribosome is made by RNA and proteins. Small amounts of lipids and metallic ions are seen in it. In SOS ribosome RNA content is 45% and protein content is 50%.

On dissociation of ribosomes different types of proteins and RNA will be resulted.

c) 5S ribosomal RNA is seen in 60S subunit. It has only 12 nucleotides. It looks like clover leaf.

The larger sub-unit will be attached to endoplasmic membrane.

2)In between the smaller and bigger subunits a channel is present. The channel is parallel to the membrane of the endoplasmic reticulum.

3)In this channel the m RNA moves, m RNA is bond to the smaller subunit.

4)-t RNA will attach to the larger sub-unit

5)On the larger sub unit two sites are present.

a) P site: It is the site where polypeptide chain is attached.

b) A site: To this site t RNA will attach which will transfer its amino acid to the growing polypeptide chain. 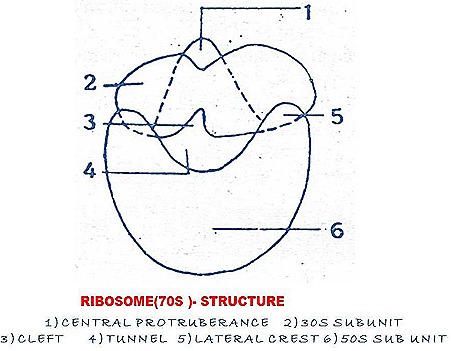 In prokaryotic cells synthesis of ribosomes will take place in the cyto­plasm.

In eukaryotic cells the synthesis of ribosomes is carried on by the nucleus.

1) Nucleolar organizing chromosomes will give rise to 28S and 18S RNAs.

2) In the nucleolar region 4OS RNA will be present. This gives rise to 28S and 18S RNAs.

5) In the nucleus outside the nucleolus 5S r RNA will form.

6) 18S R RNA with proteins will come out of the nucleus and enter into cytoplasm. It associates with other proteins it becomes 40S sub unit.

7) The 28S r RNA & 5S r RNA with some proteins will enter into cytoplasm they give 60S sub unit.Thus ribosome is synthesized.