GASTRULATION IN CHICK-II- FORMATION OF ENDODERM

Formation of endoderm: Endoderm of hypoblast develops as a single layer of cells in side of blastocoel. After the formation of endoderm, upper layer is called epiblast. There are different theories to explain the formation of endoderm.
Infiltration theory : This was proposed by Peter in 1923. According to this theory some cells in blastoderm which are loaded with yolk will fall into blastocoel. It starts from posterior end of blastoderm. From there the cells migrate forward one behind another and endoderm is formed.
Delamination theory : It was proposed by Spratt in 1946. Blastodenr.1 is two or three layered thick. The lower layer will separate-fcoijl the upper layer by splitting and the lower layer is called endoderm, upperr layers are called ectoderm. In between ectoderm and endoderm blastocoel is .present. 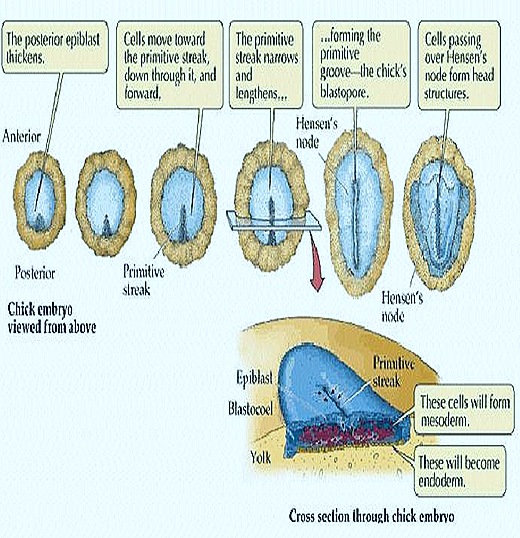 of involution : In 1909 Peterson Proposed this theory. According to this theory a slit like opening at the posterior side of blastoderm forms. Through this opening the blastoderm cells will role into the primary blastocoel. It forms an endoderm.
Theory of invaginaton : This was proposed by Jockobson in 1938. According to this theory the posterior end of blastoderm will invaginate in blastocoel as a small pocket. This becomes endoderm. In this way endoderm is formed.
Laying of the egg : Between 9 A.M. and 3 P.M., the egg is expelled from the cloaca of hen. At the time of laying formation of endoderm is completed. For further development it is to be incubated.
Incubation : When the egg is laid, the development is stopped. For further development it is to be kept at 38°C. This is done by hen by sitting over the egg. This is called incubation. Artificially eggs are incubated in incubators. For the hatching of egg 21 days are required.