Structure and Functions of NUCLEAS In Cell

In 1832 " Robert Brown" discovered nucleus. It is the essential part of the cell

A definite nucleus is absent in prokaryotic cell. Instead of it a DNA molecules is present. It is called by “Prokaryotic cell". Ex : Bacteria.

Definite nucleus is present. It is cov­ered by nuclear membrane. 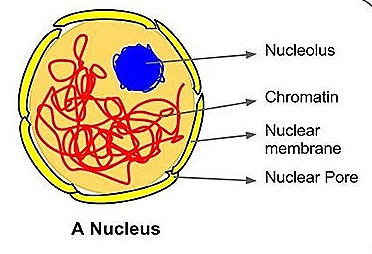 The position of a nucleus in the cell is definite. It occupies more or less central position. Now and then it is pushed to die periphery.

a) Anurfeate: Nucleus is absent Ex : RBC of mammal

b) Mononucleate : It is very common. Usually the cell contains a single nucleus

b) Binucleate : Two nuclei are present. Ex : cells of cartilage.

It is usually oval. But its shape is dependent on the cell type.

The size of the nucleus varies with cell type . It is directly proportional to the amount of cytoplasm. "Hertwig " gave nucleo plasmic index. 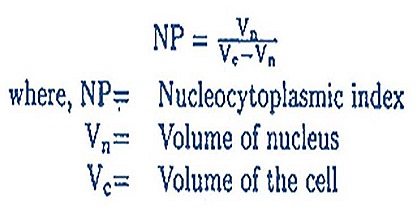 Structure :The nucleus will show.

It is called nuclear envelope. It is 100 to 150 A0. The membr< nes are unit membranes. The outer membrane bears ribosomes, It is cor, nuous with endoplasmic reticulum.

Nuclear membrane is not continuous. Here and there pores are present. Each pore is 500 tc 800 A 0 in diameter. Each pore is covered by annulus membrane The pore and annulus will be called "Pore Complex". Because of ithese pores nucleoplasm and cytoplasm will be continuous. 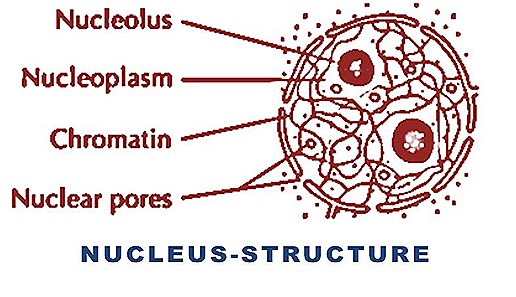 Below the nuclear membrane a transparent semifluid is present. It is granular. In this a chromatin network is present. It contains proteins, ions, enzymes, and nuclic acids. It is believed that nucleoplasm will take part in spindle formation.

In the nucleoplasm chromatin net work is present. In the inter phase nucleus the -chromosomes are fine threads, and in the form.of a net work.

In 1928 "Hertz" defined heterochromatin as condensed chromatin part. The hetero-chromatin is two types.

This is a temporary state of inactivation of chromatin. In which one chromosome of the pair will becomes hetero chromatin. Ex : In mammals the second X chromosome in the somatic cells of female will become hetero-chromatin, it is called ban* body.

Hetero-chromatic regions genitically inactive. Now a days it is believed that it contains polygens, for the synthesis of t RNA and 5S RNA. Functions :

1) It gives protection to the genome.

2)Helps in the reflection of DNA.

3)During synaptic pairing in meiosis it attracts the homologous chromosomes.

It was discovered by "Fontana". In almost all the cells in the inter-phase nucleus, nucleolus is present. The number may be one or two. In some cases hundreds of nuclei will be present. Ex. Amphibian oocyte.

The size of the nucleolus is depended upon the activity of the cell. They may be smaller or big. 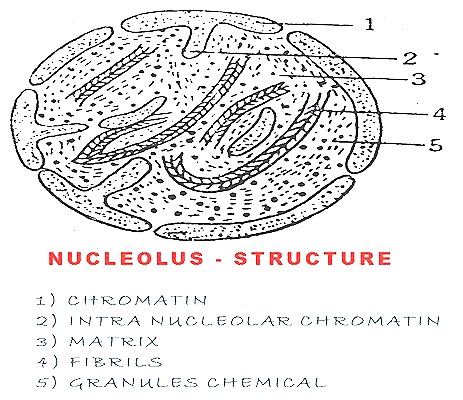 Nucleous contains RNA, proteins and enzymes. It is formed with the help of nucleolar organising chromosome. Functions :

1} It is helpful in biogenesis of ribosomes.

2) It plays a major role in mitosis.

2) It is helpful in the synthesis of ribosomes.

3) It is helpful in the synthesis of RNA.

4) It controls the synthesis of proteins.

5) It is the seat of heredity.